Anderson plays several other musical instruments, including keyboards, bass guitar, bouzouki, balalaika, saxophone, harmonica, and a variety of whistles. His solo work began with the 1983 album Walk into Light, and since then he has released another five works, including the sequel to the Jethro Tull album Thick as a Brick (1972) in 2012, entitled Thick as a Brick 2, released April 3, 2012.

Ian Anderson was born in Dunfermline, Fife, Scotland, the youngest of three brothers. His father, James Anderson, ran the RSA Boiler Fluid Company in East Port, Dunfermline. Anderson spent the first part of his childhood in Edinburgh. He was influenced by his father’s big band and jazz records and the emergence of rock music, but was disenchanted with the “show biz” style of early American rock and roll stars like Elvis Presley.

His family moved to Blackpool, Lancashire, England, in 1959, where he was educated at Blackpool Grammar School. In a 2011 interview, Anderson said he was asked to leave grammar school for refusing to submit to corporal punishment (still permitted at that time). He studied fine art at Blackpool College of Art from 1964 to 1966 while living in Lytham St Annes.

While a teenager, Anderson took a job as a sales assistant at Lewis’s department store in Blackpool, then as a vendor on a news stand.

In 1963, he formed The Blades from among school friends: Michael Stephens (guitar), John Evan (keyboards), Jeffrey Hammond (bass) and Barriemore Barlow (drums). This was a soul and blues band, with Anderson on vocals and harmonica – he had yet to take up the flute. They played their first show at the Holy Family Church Hall in North Shore.

In late 1967, Anderson was still holding down a day job, namely cleaning the Ritz Cinema in Luton, including the toilets, in the mornings, “which took me half the day” he said in a later interview. He took an old, chipped urinal from the cinema storeroom and had it for a time after leaving the job. It was not, however, the urinal which “was bolted to the side of John Evan’s Hammond organ on stage” and figured in early 1970s Tull performances.

At this time Anderson abandoned his ambition to play electric guitar, allegedly because he felt he would never be “as good as Eric Clapton”. As he himself tells it in the introduction to the video Nothing Is Easy: Live at the Isle of Wight 1970, he traded his electric guitar in for a flute which, after some weeks of practice, he found he could play fairly well in a rock and blues style. According to the sleeve notes for the first Tull album, This Was (1968), he had been playing the flute only a few months when the album was recorded. His guitar practice did not go to waste either, as he continued to play acoustic guitar, using it as a melodic and rhythmic instrument. As his career progressed, he added soprano saxophone, mandolin, keyboards and other instruments to his arsenal.

His tendency to stand on one leg while playing the flute came about by accident, as he had been inclined to stand on one leg while playing the harmonica, holding the microphone stand for balance. Anderson was known for his famous one-legged flute stance, and was once referred to as a “deranged flamingo”.[7] This stance is on many album covers of Jethro Tull. During a long stint at the Marquee Club, a journalist described him, wrongly, as standing on one leg to play the flute, when in fact he was originally playing the harmonica on one leg. He decided to live up to the reputation, albeit with some difficulty. His early attempts are visible in The Rolling Stones Rock and Roll Circus(1968) film appearance of Jethro Tull. This was referenced in the facetious liner notes for Thick as a Brick in a quote about “the one-legged pop flautist, Ian Anderson”. 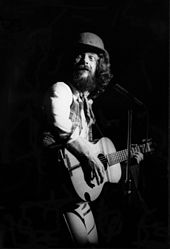 Anderson already wished to start a solo career in 1980, when Jethro Tull was going to take a break after John Glascock’s death. He wrote the album A as a solo record, but Martin Barre and Dave Pegg’s participation led the album to be released under the Jethro Tull name, causing the old band to split. His first official solo album was Walk into Light, in 1983, in which Peter-John Vettese played an important role in the electronic direction of the music.

In 2011, with the end of Jethro Tull touring, and the question of his friend Derek Shulman (whatever happened to Gerald Bostock?),Anderson begun to produce a sequel to Thick as a Brick (1972), entitled Thick as a Brick 2 or TAAB2, was released on 3 April 2012. It is billed as being performed by Jethro Tull’s Ian Anderson instead of being a Jethro Tull album proper. Anderson toured performing both albums in their entirety. A trailer for TAAB2 was posted on YouTube.

Anderson released a new album, Homo Erraticus, in May 2014. He described it as a progressive rock concept album blending rock, folk, and metal music peaking at No. 14 in the UK Albums Chart it is his most successful ever solo album.

In September 2017, Anderson announced plans for a tour to commemorate the fiftieth anniversary of This Was, and a new studio album in 2019. The band line-up includes Anderson, Hammond, Opahle, O’Hara, and Goodier (all musicians of Anderson’s solo band since 2012), with Barre absent from the lineup.

On 2 January 2018, Ian Anderson published a New Year post on jethrotull.com, including a picture of Anderson with the caption “IA in the studio working on a new album for release March 2019. Shhhh; keep it a secret…”

On 1 June 2018, Parlophone Records released a new (50-track) career collection celebrating the Jethro Tull’s 50th anniversary featuring all 21 Tull albums, named 50 for 50. In the notes of the 50 for 50 booklet it is said that the new album scheduled for 2019 will be a solo record by Ian Anderson and not a new album by Jethro Tull.

This website uses cookies to improve your experience while you navigate through the website. Out of these, the cookies that are categorized as necessary are stored on your browser as they are essential for the working of basic functionalities of the website. We also use third-party cookies that help us analyze and understand how you use this website. These cookies will be stored in your browser only with your consent. You also have the option to opt-out of these cookies. But opting out of some of these cookies may affect your browsing experience.
Necessary Always Enabled

Any cookies that may not be particularly necessary for the website to function and is used specifically to collect user personal data via analytics, ads, other embedded contents are termed as non-necessary cookies. It is mandatory to procure user consent prior to running these cookies on your website.

error: Content is protected !!
We use cookies to ensure that we give you the best experience on our website. If you continue to use this site we will assume that you are happy with it.Ok
Go to Top